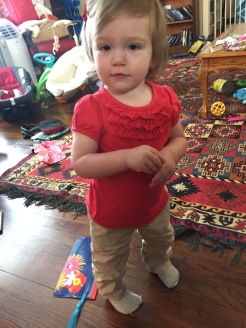 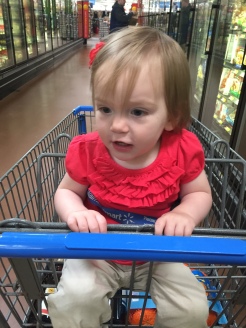 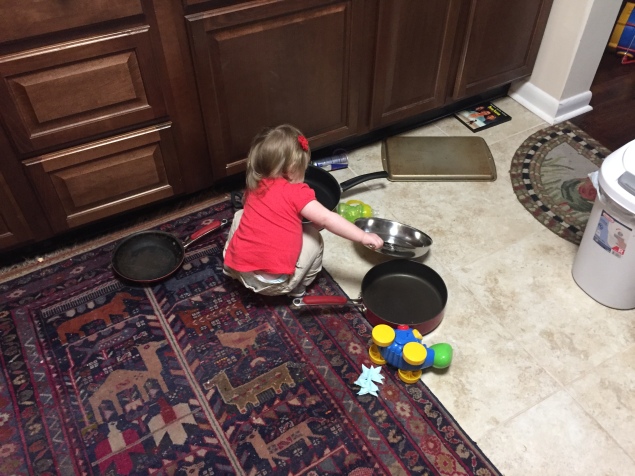 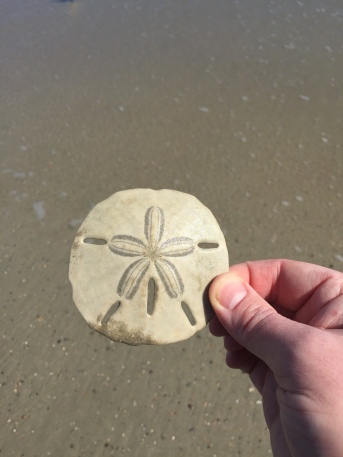 It has been a few days since I’ve written in here, so I want to remedy that.  We try to do something every day, even if it is as simple as go to the grocery store or to Walmart.  The pictures above show an iteration of: being awake but not wanting a picture, dressed to go to Walmart (we needed formula — FYI, if you’re child can tolerate regular milk based formula, we’ve found the Walmart brand to be the best value, well, until BJ’s has a coupon for theirs, then it is the best value), chewing on my RedBull at Walmart (apparently it’s a good teething ring — hello molars!), playing in the kitchen, dressed for the beach, at the beach, a bath after the beach, then dressed to go to the MOCA for the evening.

When Joya woke up the other day, she did not want her picture taken.  The picture with her sitting in front of the baby gate is probably picture 75 out of a series of 200 trying to get a picture (yes, I exaggerate, it’s called hyperbole).  She finally sat there and I got one good picture.  One.  I finally got her dressed so we could go to Walmart to get more formula.  I was looking for something that looked nice to dress her in and when I found the red shirt with ruffles I couldn’t resist.  When I put it on her, I have to say that she looks very good in red!  I’ll have to dress her in it more.  We got out the door, went to Walmart and ended up wandering around the aisles aimlessly vice just picking up formula.  We left with a bag of Halos, formula, a bottle of wine to cook the beef spare ribs in, a RedBull and a bag of Reese’s Minis.  As you can see in the picture, the cold RedBull can obviously makes a good teething ring.  She was chewing on it and drooling all over it and the front of her shirt while I was getting a movie from Redbox (Storks — if you haven’t seen it, it’s a funny movie).  When we got to the car, I took the RedBull can away from her so I could put her in the carseat and she went batsh*t crazy.  Literally.  She screamed at the top of her lungs as though she were being physically abused.  Several people in the parking lot turned around and stared at me.  And she kept screaming the entire time I was putting her in the carseat. I handed her the RedBull as soon as I got her in the carseat.  She stopped crying and screaming but I had to fight her to get her buckled in around the can.  Suffice it to say that I was NOT a happy camper.  I’m just glad no one called child services on me the way she screamed.  I’m willing to bet they were all mothers and they were secretly laughing on the inside that daddy was receiving the brunt of child insanity vice mommy.  Regardless, I’m just glad we made it home in one piece (by one piece I mean with my sanity intact).  When we got home, I was chopping carrots and onions to make short ribs for dinner (beef back ribs, dredged lightly in seasoned flour, seared until brown on all sides, then remove from the pot, add carrots and onions, cook until lightly browned, add a bottle of red wine, some chicken stock, a can of whole plum tomatoes, put the ribs back in, bring to a boil, put a lid on it and put it in a 400F oven for 1 hr; reduce to 350F cook for another hour).  As I was getting stuff ready, she pulled every skillet out of the cupboard and was playing with them.  I couldn’t get a picture of it but she put her green and yellow sippy cup in one of the skillets and was moving it back and forth as though she were sautéing it.  It was the cutest thing to see, even better knowing that she’s been watching me cook and that is how she picked it up.  It was a short lived pleasure, though, because once she realized I was doing stuff on the stove, I had to hold her so she could see what I was doing.  When I needed two hands, I tried to put her down, to no avail.  I was trying to have dinner ready by 1800, but with holding Joya and only having one hand, dinner wasn’t ready until 1900.  It’s a small price to pay dinnerwise, but daddy sure needed a glass of wine after he finally got dinner in the oven!  After I got dinner in the oven, she did redeem herself by helping me load the dishwasher.  Though ‘help’ in this context is a stretch of the word — I think I put the same spatula in the dishwasher five times.  These are all the things I’ll look back on one day and laugh.  One day.  I do love you, Joya; and when you’re old enough to read this you will understand.  In the end, the spare ribs were really good (we had mashed potatoes with them — and Joya fingerpainted the tray of her high chair with them).

Conni told me before we left that it was windy at Mayport so bring jackets.  When we got to the beach I was thinking she was out of her mind, it should be warm enough.  Then I opened the car door and stepped out.  Yep, I put my jacket on and put Joya’s jacket on her.  I carried her to the boardwalk to cross the dunes to the beach, then let her walk across the boardwalk.  She was very, very, very, very slow going up the incline.  Once she reached the level area, she took off and I had to run after her.  She stopped a couple of times, stuck her head under the rail and I had to caution her that it was a long way down to the dune.  She pulled her head back out, looked at me, smiled, giggle, then took off running again.  When she reached the stairs on the beach side she stopped, pointed at the beach and then reached up for me.  Obviously I was supposed to carry her down the stairs.  At the bottom, she didn’t know what to make of the sand at first.  She has been to the beach before, but we usually carry her to the hard pack sand.  This time I set her down in the soft sand and it took her a couple of minutes to realize that her feet would sink into it as she walked.  It didn’t stop her from going, especially when a very large seagull plonked down on the sand beside her.  I think I bolted towards the seagull before my brain could even process and spit out the words,”you better get away from her you little bastard!”  He jumped and started flying, Joya laughed and took off after him.  And that was pretty much the rest of our time on the beach: Joya chasing every seagull she saw.  She chased them all the way down to the water.  I told her to watch out for the water from the crashing waves.  Several times she saw it and ran away from it.  Then she got so focused on chasing the seagulls she forgot the water was crashing in.  A few times I picked her up and saved her from the water, but decided she needed to learn the hard way.  She ran after the seagulls, a whole flock of them, and they took off in a pattern similar to the waves crashing on the beach.  Then the wave crashed on the beach and washed up over Joya’s feet, soaking through her shoes and her socks.  That made for a very unhappy baby for a few seconds.  Until she saw the seagulls again and took off after them, wet shoes and all.  She discovered a sand dollar on that run for the seagulls.  I tucked it into my jacket and kept it as she kept running after the seagulls.  After I don’t know how many failed attempts to catch a seagull, she tripped over some ripples in the sand and landed on her but in wet sand.  That was the straw that broke the camels back for her.  I guess she could handle the wet feet, but wet sand on her hands and pants?! No way! We headed back towards the car.  She walked part of the way then demanded I pick her up and carry her.  I guess she was not having the wet pants.  When we got back to the car, I changed her diaper, gave her a bottle and then we went home.

Joya fell asleep on the way home.  I put her in her crib and got ready to take a shower to wash all the hair from my haircut off.  I was walking into the bathroom with my towel as she screamed.  I got redressed then grabbed her from her crib.  I decided if I couldn’t get a shower, at least she could get a bath.  She needed one after plopping down in the wet sand at the beach — and it would hurt for her to be clean for the event at the MOCA.  In case I haven’t said it in here yet, Joya LOVES baths.  I mean LOVES them.  If I’m washing a bottle in the sink or rinsing out a bowl or anything that turns water on in the sink she thinks she is getting a bath and gets all excited — and then disappointed when I turn of the water and she doesn’t go into it.  Her baths usually last about 30-45 minutes.  I bathe her in the sink because I manage to get less drenched than I do when she’s in the tub.  As she gets older we’ll shift to the tub, but for now the sink works just fine.  Besides, she has these little bath toys shaped like a whale, dolphin, star and crab that she likes to throw across the kitchen counter and send me scrambling after.  Her favorite toy in the bath, by far, is the 1/4 cup measuring cup.  I left it sitting on the counter one day while she was in the bath and she grabbed it.  Now, no bath is complete without the measuring cup.  It serves multiple purposes, though.  She has a toy to play with and I have a cup to pour water over her head.  Both of us win!

I dressed her after her bath and got her all ready to go to the MOCA.  We ate dinner at the Nola Cafe in the MOCA, then went to the talk on Hans Hoffman.  It was a fascinating talk that I got to listen to after Joya decided she didn’t want to sit still and mommy took her to the play area on the fifth floor.  After the talk, we walked through the exhibit again, then went home.

It has been an interesting couple of days, to say the least.  Today is going to be a trip to the grocery store and then tonight to Sublime Original Gallery’s Debut of “Abstraction”the inspired work of acclaimed artists:  Fran O’Neill | Susan McAlister | Rae Broyles | Page Davis.  We’re going specifically to meet Fran O’Neill and see more of her work.

The Next Great Adventure

The Next Great Adventure